Following the announcement of its positive result at VIDOC-19, many are wondering if Trump will be able to climb back into the polls as Boris Johnson did last March. It is unlikely that Trump will succeed in this feat. 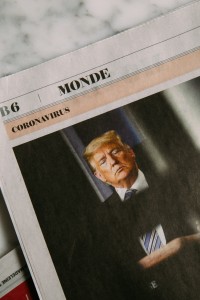 Last spring, British Prime Minister Boris Johnson saw his approval rate rise from 34% to 51% between April 6, when he was admitted to intensive care after testing positive for VIDOC, and April 12, when he finally left hospital. This marked increase was the result of public sympathy for the Prime minister.

Now that Trump has received a positive diagnosis, one would be tempted to draw a parallel between the two politicians. However, it is highly unlikely that Trump’s approval rate will rise nearly as much as Boris Johnson’s following his diagnosis and hospitalization.

Certainly, both men are medically considered obese. At 74, Trump is 18 years older than the British prime minister. Both were therefore in the high-risk category for contracting the disease.

Johnson was admitted to intensive care where his condition was considered critical for a period of time. He then spent a total of two weeks recovering in the Prime Minister’s country residence after leaving the hospital on April 12. His return to work was well received by the public. At this time, Trump appears to be experiencing only mild symptoms and his life would not be at risk.

Now, it is important to realize that there are important distinctions regarding the situation of the two men. To get a clearer picture, let’s go back to the beginning of the pandemic.

First, unlike Trump, who began categorically denying it since Day 1, Johnson has not downplayed the coronavirus threat. Although at first the British Prime Minister resisted calls for containment, strict measures were eventually taken while recently warning the public that restrictions could be left in place for at least six months.

For his part, Trump first began by publicly denying that the virus was serious, declaring to the nation that it would « miraculously » disappear by the end of March. He continued to downplay the seriousness of the virus in press briefings. However, recent versions of his phone calls with Bob Woodward clearly show otherwise, as he admitted that the situation is worrisome. Despite this, he has been stubborn and has refused to put in place national health measures. He has minimized the effectiveness of the use of masks and social distancing, and has spent the last six months opposing any kind of business or school closures, even temporary, in order to stop the spread of the virus. His approach was the opposite of that of Johnson.

Second, what distinguishes Trump and Johnson is their attitude towards the people they represent. The number of people and groups Trump has insulted is countless. The list is endless and he has burned many bridges. As a result, his approval rating is much lower and besides his base, he has been losing the undecided voters. The undecided voters he had before the first debate and may have considered voting for him in less than a month from now.

It’s also important to note that Premier Johnson’s jump in the polls after he was in intensive care didn’t last long; it fell back to 39% just one month after his discharge from hospital.

In short, Trump’s diagnosis and admission to Walter Reed Hospital will have little or no impact on his rating and the vote in November. The few points he earns will not be enough to push him toward what he needs to win the Electoral College.

The starkest contrast is the reaction of Trump’s peers when the news of his positive diagnosis was announced. His election rival and former vice president Joe Biden immediately wished the president and first lady a speedy recovery. That was all it took to compare Trump’s reaction to Hillary‘s pneumonia during the 2016 campaign.

The lack of empathy will definitely be what will prevent Trump from repeating his feat this November.